The Pearl District is finally getting it’s park! 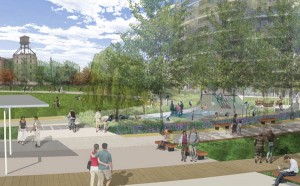 My clients in the Pearl District are going to be so excited!  Especially the ones with kids and dogs!

After more than a decade of conceptualizing, planning and designing, Fields Neighborhood Park is now under construction in the northeast end of the Pearl District.

R&R Construction this month started work on the $3.1 million project, in which a 3.2-acre parcel is being transformed into a recreational field and play area.

“I think it’s going to be kind of a game-changer for the North Pearl District,” said Dave Davis, president of the Pearl District Neighborhood Association.

Davis, whose condominium overlooks the park, said access to a large swath of land where residents can exercise, play softball or throw a flying disc is long overdue for the dense downtown area.

But design involved more work than plotting four corners of a field and planting some turf. Andrew Sullivan, an associate principal at the Office of Cheryl Barton, which designed the park, said the community wanted to make sure the San Francisco firm got it right.

“A lot of people know, short of something happening with Centennial Mills, that this is the last big piece of open space that is planned for this area of the Pearl,” Sullivan said. “So it’s their last real chance to get the park they want for their future, family or whatever their agenda might be.”

Fields Neighborhood Park was designed by the Office of Cheryl Barton and will include a dog area, children’s play areas and a large open space.

Sullivan said some people wanted the space to be a huge dog park, while others wanted children’s play areas, and others wanted only a field. The result is a design featuring all of those elements with a motif that aims to conjure the swirling, sweeping, eddying image of the nearby Willamette River.

Sullivan said the plan is to include artistically scoured lines in the sidewalks, interactive play walls for children, permeable pavers and rain gardens to recycle stormwater. But a big design aspect will be wave-like planters and tree canopies.

“I think what we’re trying to do is use the planter to kind of pop lots of different colors,” he said. “We’ve got these sweeps at both the ground level – these beds of perennials and canopy trees around the perimeter – and these sweeps that will have really nice spring blossoms as well as fall colors.”

Sullivan said another focus will be encouraging kids to interact with nature. Play walls will invite children to reach plants through openings and play areas will steer kids through planters rather than around them.

One original design aspect that will not be present is a pedestrian bridge linking the Fields park to the Portland Development Commission’s nearby Centennial Mills site. Shawn Uhlman, spokesman for the PDC, said the agency is reviewing development proposals from Venerable Properties and Daniels Real Estate for that site. The preferred proposal is planned to be presented during a meeting on May 23.

Sullivan said the Fields park was designed to accommodate construction of a pedestrian bridge to the Centennial Mills site when that property is finally developed.

The Fields park also represents completion of negotiations between Hoyt Street Properties LLC and the city of Portland.

Riley Whitcomb, system development charge program manager for Portland Parks and Recreation, said Hoyt donated the three-acre site in exchange for consideration of a $650,000 waiver on a future development project. Whitcomb said $400,000 of that waiver would come from the parks bureau and the remaining $250,000 would come from the PDC. He said it was a small price to pay for an integral piece of property.

“We really needed that extra land, and from that standpoint it was a very good deal,” Whitcomb said. “The value of the property is a lot greater than the credits that we will likely eventually give them.”

“We wanted an exceptional park rather than just land and a couple trees thrown here and there,” Davis said. “But the proof is in the pudding.”

(Rendering courtesy of the Office of Cheryl Barton)