What’s New in the Pearl District?

Design is underway for Block 17 in the Pearl. 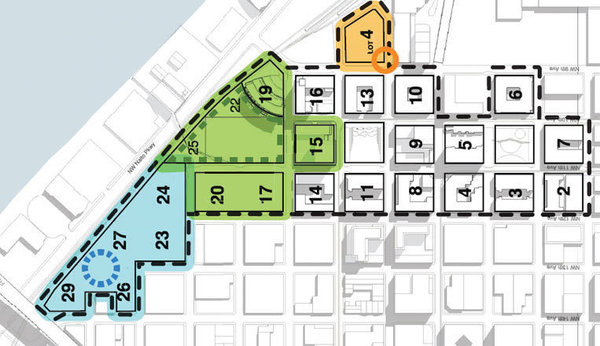 Unfortunately — Boora declined my request for renderings at this time.

With the project shaping up, so far we know the following:

Feedback from residents and guests of the meeting was mixed. Most agreed the northern end of the Pearl District is currently in a “white” facade trend. They urged the developer and architect to avoid using white. Also, others pushed for a substantial design difference between the mid-rise and tower. Currently the mid-rise is modern, but residents suggested making it more traditional. Folks even commented on the staggered windows, saying, “they’re a 2010 trend.”

The committee seemed intrigued by the courtyard between the tower and mid-rise, but discouraged by the lack of integration the park has with the site on 11th avenue. The courtyard runs North to South, and has three entrances. Two of those entrances are staircases; which were criticized as uninviting, but Hoyt did ensure the staircases are wide.

Boora and Hoyt will return in July or August with an updated design.

Thanks to  Joseph Krahn for the use of his blog post.